On November 17th, Steve, Tom, and Tony traveled 2000 miles to Hollywood California to take desk 7 to Randy Stone, a producer with Warner Bros.

Today, we traveled from Miami OK, to Grants NM. About 800 miles. Along the way we stopped at the world's largest McDonalds, but we ate at a truck stop where we met Gabby Hayes Jr.

Today's trip takes us through the rest of New Mexico, Arizona, and California.

Our schedule for the week is as follows:

Today started out slowly. After a long nights sleep, Randy and I met up with Tom and Tony around lunch time. We ate at a very nice down town deli where Tony ate an Ostrich Burger!

Outside waiting for Randy

When we arrived at the Warner Bros. back lot, we realized that the desk was 1/2 inch too big for the doorway. Not a problem for Warner Bros. workers who took a window out and brought the desk in, with the help of 8 men, through the office window. After installing the desk, we took a golf cart tour with Randy through the rest of the back lot where ER, Drew, Friends and other shows are filmed. We then went to studio 17 where we met Kathy Kinney (Mimi) and saw the whole cast on a closed set filming a scene for an upcoming show. We were standing behind the camera crew and director watching a scene that involved the whole cast. After the scene, Kathy came back and talked with us again and gave us an autographed picture. Sorry, we couldn't take pictures on the set.

Tomorrow (Tuesday) we plan on taking a trip up the coast. Later in the afternoon we will finish installing the desk.

Here are some leftover pictures from Monday.

Today, Tony and I went up the coast to the Sea Bee Base at Port Hueneme (Why-nee-mee). We took the Pacific Coast Highway through Malibu. We returned to Burbank later in the afternoon and then ate at Tony Romas World Famous Ribs. Yummy! In the evening we went to the Hollywood Blvd. to see the Chinese Theater and other notable landmarks.

Today we started the day out at a small corner Cafe eating breakfast.

After breakfast we went back to Warner Bros. to work on the desk. When they moved the desk in the window they damaged the middle door. We spent the morning making it all better again. We also ate lunch at the Warner Bros. Commissary.

Randy brought his awards today for us to see.

We also received our Kathy Kinney Autographs. Kathy was very gracious to sign these for us and wonderful to talk to and went out of her way to get us on the set. What a great person! 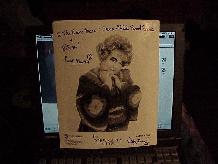 After working on the desk, we moved over to NBC and used our VIP passes to watch the Tonight Show with Jay Leno

After The Tonight Show, we went back to Hollywood Blvd. Tomorrow we go back to Warner Brothers to take pictures of the finished desk.